The fabulous fashions of the Jazz Age seem always to come back in style, their sheer energy jumping off the page or screen.. The 1920s flapper style has become a fashion icon, and Hollywood movies played a big part in spreading the look. The young flapper woman was herself a novelty. As a reaction to the end of World War I in 1918 and the massive loss of young men, women’s styles became liberated, and favored the look of young men or boys. The short haircuts started earlier by Irene Castle became even shorter with stars Colleen Moore, Clara Bow, Louise Brooks, and Norma Shearer. The fashions of Paul Poiret and Coco Chanel that had eliminated corsets had now changed to straight-sided, flat-chested, short-skirted and sleeveless dresses. This provocative look was matched by a lifestyle that favored fast cars, jazz clubs, and wild dancing. Smoking and drinking was taken for granted. And sex was always on the flapper’s mind.

Colleen Moore above started in the movies in 1917 and was considered the perfect flapper in the movie Flaming Youth in 1923.  By 1927 she was a top box-office star and fashion icon.

Louise Brooks is shown above circa 1929. Louise was a free spirit that was the flapper ideal. She made several films for Paramount but quit the studio in a disagreement. She then went to Germany to star in the films Pandora’s Box and Diary of a Lost Girl for G.W. Pabst in 1929. Both films were censored. Late in life she wrote an autobiography, Lulu in Hollywood. Her photos have a mesmerizing quality that make them prized collector items. 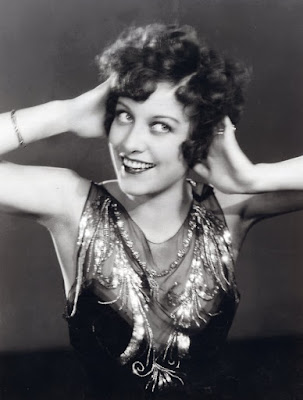 Joan Crawford, shown above, was considered by F.Scott Fitzgerald to be the perfect embodiment of the Jazz Age woman. She began her career at MGM in 1925, and is shown above in Our Modern Maidens, 1929. Adrian designed the costumes for this movie, as he did for most of her early films. and all of her subsequent MGM films’ “I don’t remember any fashion before Adrian.” she said. 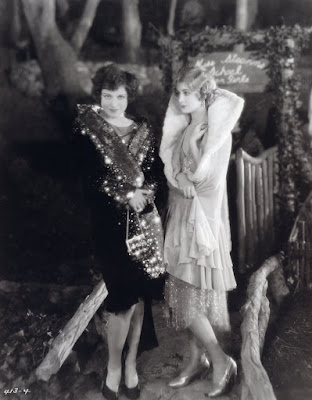 The photo above shows Joan Crawford and Josephine Dunn in Our Modern Maidens. Joan wears a sequined coat over the flapper dress that is shown in her first photo. Josephine Dunn wears a coat over her silver-fringed flapper dress. Joan is also shown below in total flapper mode for Our Dancing Daughters, 1928. This dress was also an Adrian design. 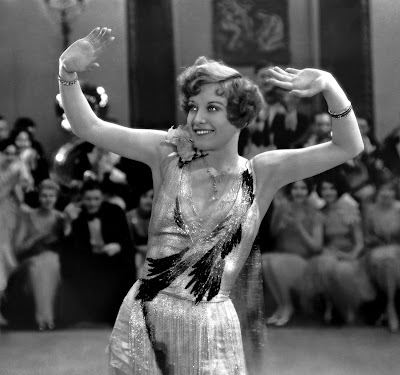 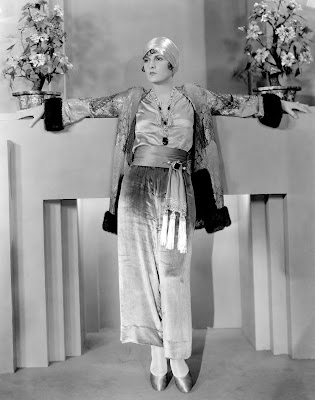 Evelyn Brent was another silver screen flapper. She was a big star in the silent era but never made a successful transition to sound. She is often photographed with a wide silk headband and had a striking profile. She is pictured above for an unknown publicity shot, circa 1930. The dress “pajamas” she is wearing were very fashionable as boudoir or beachwear in Europe. Adrian popularized pajamas for evening wear in 1929-1930 by having Greta Garbo wear them on screen, and predicting the popularity of pants for women. 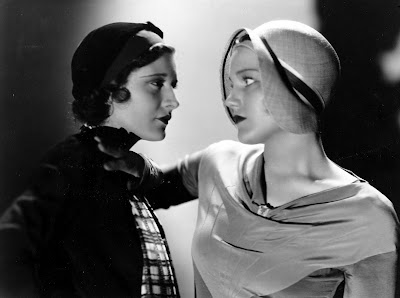 Evelyn Brent at left is shown above with Constance Cummings in Travelling Husbands, 1931. Constance wears a cloche hat, the trademark flapper head piece. When Adrian, the son of milliners, put Greta Garbo in a slanted Empress Eugenie hat in Romance in 1930, the cloche went out of style. 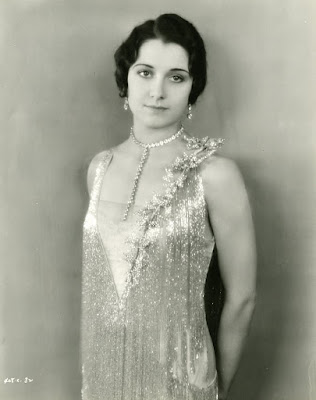 Julia Faye is shown above in a silver-fringed dress designed by Adrian for Dynamite, 1929. Ms. Faye must hold a record for the most uncredited roles on film. She first appeared in movies in 1915 and ended her career on TV in 1963. She was in many C.B. DeMille films, including The Squaw Man in 1918 and the first The Ten Commandments in 1923. 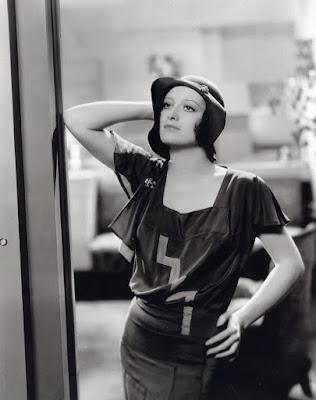 Joan is seen again in Our Blushing Brides in 1930, the final film in the “trilogy” with Our Dancing Daughters and Our Modern Maidens. Adrian designed the dress with a great jazz age symbol of a zig-zag pattern on the bodice.

The jazz age flapper style was at its end by 1931. The stock market crash of 1929 took the wind out of the sails of the free-spirited lifestyle that the flapper signified. And the long dresses introduced in Paris by Jean Patou changed the hemline for decades to come. This also caused a problem for Hollywood movies that were suddenly caught out of style – prompting a search for costume designers with couture backgrounds. But Hollywood films and movie stars had helped spread the flapper style’s popularity. Now the style making its debut on the silver screen was one of sex appeal and glamour – still created by costume designers Adrian and Travis Banton. Fluctuations in style would no longer matter. The “Hollywood line” emphasized timeless glamour and the figure-hugging silhouette that plainly put sex appeal in clothing. The Hollywood styles would now be influencing the European couturiers.

Travis Banton designed the wild costume pictured above for Evelyn Brent in SLIGHTLY SCARLET, 1930. Evelyn Brent plays the unwilling accomplice of a jewel thief in Paris and the French Riviera in this caper. She looks like a jewel herself in this Travis Banton “hostess gown.”  The fabric was a sapphire blue chiffon, encrusted with crystal bugle beads. She wears no brassiere, definitely pre-code.