What five classic movies would you want with you if you were stranded on a desert island? That’s the question Rick of the Classic Film and TV Café posed to several of us participating in his Blogathon in commemoration of a National Classic Movie Day. That’s a pretty short number, especially for being stranded for who knows how long, We could probably come up with our “100 Favorite Movies to Be Stranded on a Desert Island,” while exercising a little fantasy and throwing in some guilty pleasures. But Rick is holding the line.

So my rationale is that I had to fall back on my all-time favorites, movies I’ve seen over and over with continued pleasure, or maybe because of some inner need these films seemed to fill. They also fell into a sort of chronology of my life, as to when I first saw them, and perhaps representing that era. Regardless, there were many that vied for 4th and 5th place and could easily have been swapped as I held them in high esteem and they fit my criteria well. Is there an island-hopping option Rick, with various movies at each?

Resigned to 5, they are:

CASABLANCA  –  A  movie on many classic film top ten lists, it’s also my favorite, a fast-paced thriller with characters galore and dialogue that has provided more apt quotes than any other movie. I never tire of seeing it. From the first few frames of its opening scenes I’m projected into a foreign place and time, where intrigues and passions are always on the simmer. No need for special effects here, your senses are grabbed by the base emotions of the people made large on the screen, with plot twists and small climaxes happening at regular intervals throughout the film. Two scenes in Rick’s Cafe American involving music are unforgettable: the endearing but melencholy singing of “As Time Goes By” by Dooley Wilson (“Play it Sam”), and the rousing and for me, choked-up playing and singing of the “Marseillaise,” the French national anthem – in opposition to the Nazis in the bar. The end of the movie itself is a surprise, bittersweet, but with doors left wide open for other adventures.

But I’ll always think, would my sweetie have come with me to this desert island? Or did she plan all along to go with away with Victor Laszlo? 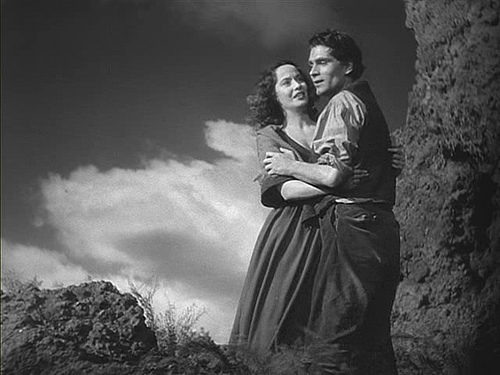 WUTHERING HEIGHTS  I have several reasons for choosing this dark gothic, tragic  romance. Perhaps the easiest one is the appeal of its diametrically opposite nature, the dark and stormy Moors as relief from a sun-drenched desert island. But I always harbored an inner Heathcliff, a subconscious element from my childhood perhaps. Its actors are outstanding, the top-rung of the British of that period (1939) – Laurence Olivier, Merle Oberon, David Niven, and  Flora Robson. The story conveys the conflict between convention and passion that was at the heart of Romanticism, and Olivier burns the screen with his jealosy, love, hate, vengeance, and regret. The conflicted love story of Heathcliff and Cathy is as powerful as has ever been put on the screen. It was one of the great movies of 1939 and was nominated for eight Academy Awards, including Best Actor for Olivier and Best Director for William Wyler.

The base theme of vengeance that lurks in the movie is one that, sad to say, appeals to me, as does Heathcliff’s madness and singlemindidness. Romantic period tropes that drew me to Edgar Allen Poe and Baudelaire. An alternative movie I had in mind, one that has some of the same appeal, but in a completely different setting, and which I never tire of seeing, is The Outlaw Josey Wales.

SINGING IN THE RAIN   And now for something completely different, as the’d say on Monty Python’s Flying Circus. Another “usual suspect” on the top ten list of best movies, and often picked as the “best musical.” Who doesn’t need a good laugh on a desert island? It’s hard to pick a movie with good belly-laughs these days. I was thinking of It’s a Mad Mad Mad Mad World as a possiblity, but this is really one of my favorites. A re-cap of Hollywood movie-making itself with a bunch of whistle-while-you-work tunes. Not to mention the powereful Broadway Rhythm Ballet with Gene Kelly and Cyd Charisse, Donald O’Connor’s number to “Make ’em Laugh”, the wonderful duo to “Moses Supposes”,  the iconic Gene Kelly song and dance to the title number, “Singing in the Rain, ” the talented Debbie Reynolds and Jean Hagen, and those wonderful costumes by Walter Plunkett. Just think of yourself kicking up the sand as you’re “Singing in the Rain.”

BLOWUP   I’ve blogged often about Antonioni’s Blowup, an all-time favorite movie of mine that seems to perplex most people I mention it to. It grabbed me on a visceral level when I first saw it at age 18. I needed no explanation of its meaning. The murder mystery at its face was enough, and the unanswerable meaning of life it implied was already keenly felt. Francis Ford Coppola stated Blowup was a big influence on him, especially on his film The Conversation. Blowup is another film I never tire of watching, reveling in Antonioni’s silent and scoreless scenes of David Hemmings walking through London’s Maryon Park, with only the sound of rustling leaves to be heard, or of Hemmings fighting for a broken guitar neck at a Yardbirds concert, only to throw it away as soon as he’s free. If you are curious or perplexed, see my post on Blowup

THE SHAWSHANK REDEMPTION  This modern classic is based on a novella by Stephan King.  While I like stories of redemption: Crime and Punishment; American Gigolo, the redemption here has nothing to do with the protagonist’s (Andy Dufresne played by Tim Robbins) guilt but rather by his years-long effort to finally free himself from a corrupt prison system while making off with the warden’s crooked gains. His pairing with prison-mate Ellis “Red” Redding played by Morgon Freeman is inspirational (although the casting was accidental). The scene where Andy locks himself in the warden’s office and plays an aria from the Marriage of Figaro over the prison loudspeaker, for all the inmates to hear in the yard,  they dumbstruck as if hearing the voices of the angels from on-high, is one of the high-spots of filmmaking. Naturally, Andy paid dearly for this stunt, and you can see his moment of glory disappear from his face as the guards finally break in the door. This movie is not always fun to watch, but its end is very satisfying. I figure I need a good prison break-out movie on a desert island. There are plenty of those of course, not to mention desert island movies including several versions of The Swiss Family Robinson, and Cast Away, where I might actually learn something useful about desert island living.

These are my five choices for desert island classic film viewing. But how about some TV series Rick? That way we could stretch things out a bit. Maybe even have some binge-watching – what else are you going to do on a desert island” That way you could really have some relevant watching, shows like Black Sails. And there’s always the Twilight Zone marathon.