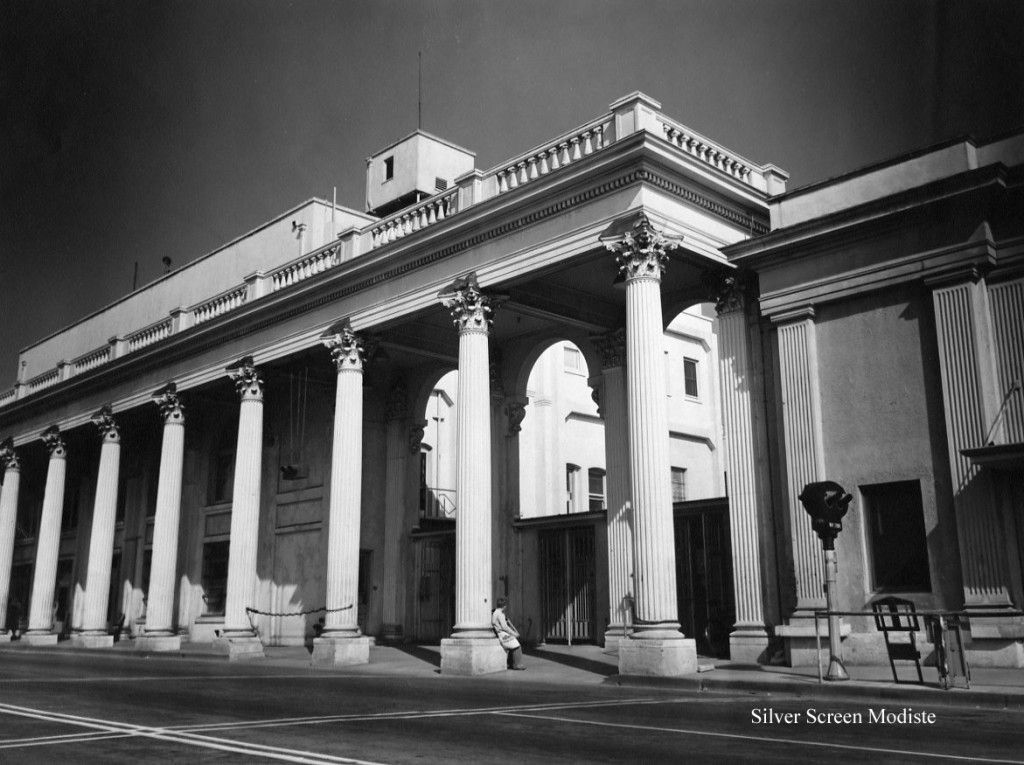 The 1974 film That’s Entertainment, was a surprise hit for MGM, placing in the top 20  movies of the year and resulting in a sequel in 1976. The movie showed clips of the studio’s library of great musicals, narrated by its former stars.: Fred Astaire; Gene Kelly; Elizabeth Taylor; and Frank Sinatra, among others, and were filmed as they walked through the old standing sets of the back lots 3 through 6. In 1974 these back lot standing sets looked forlorn and worn down. Fred Astaire began the documentary at the train station on lot 2, where years earlier he had sung the first song in Band Wagon. He walked in front of a train wagon that was falling apart. Bing Crosby narrates a visit to the English lake and its Waterloo bridge that he describes as looking “scruffy.” Donald O’Connor introduces the Esther Williams movies by visiting the outdoor pool that had been built just for her films. The whole area looked looked like some of our Southern California foreclosed properties of late.

The 1970s were not good years for MGM. Losses from declining revenues led to a corporate take-over by Kirk Kerkorian in 1969. He had little interest in movie-making, Kirkorian was mostly interested in using the MGM name for his hotel development in Las Vegas and other locations. Kirkorian installed James Aubrey as his hatchet man.  A large staff-cut was Aubrey’s first move, with several film projects cancelled. Next was the  famous (or infamous) 1970 MGM auction held over eighteen days of the studio’s collection of 12,000 props and rolling stock, even including its paddle steamboat, as well as some 350,000 costumes and “star wardrobe.” The year after That’s Entertainment was made, all of the lots with the standing sets were sold for residential development, thus all traces of them are gone today.

With its patriarch Louis B. Mayer long gone, apparently the only persons that thought the back lots should be preserved for posterity, as a museum  or attraction park, was Debbie Reynolds, and Robert Nudelman of the Hollywood Heritage organization. Debbie had tried to buy them for that purpose (no doubt at an affordable rate) but was unsuccessful. A virtual tour of some of the standing sets through M-G-M’s Golden Age follows.

The classic era M-G-M studio had several lots. Lot number 1 where all the offices and major buildings were located was bordered by Washington Street, Culver Blvd. Overland Avenue, and Madison Blvd. While most of the lot had been taken over by sound stages and various buildings by the 1930s, part of the lot still had exterior standing sets through the 1950s. That lot is now occupied by the Sony Studios.

Lot 1 also had standing sets, these changed over time, some having been there since the days when it was the Thomas Ince studio and then the Goldwyn Studio. The M-G-M standing sets were on the Overland Avenue side of the lot. This area even included a concrete lined “lake” and the waterfront town as can be seen below. 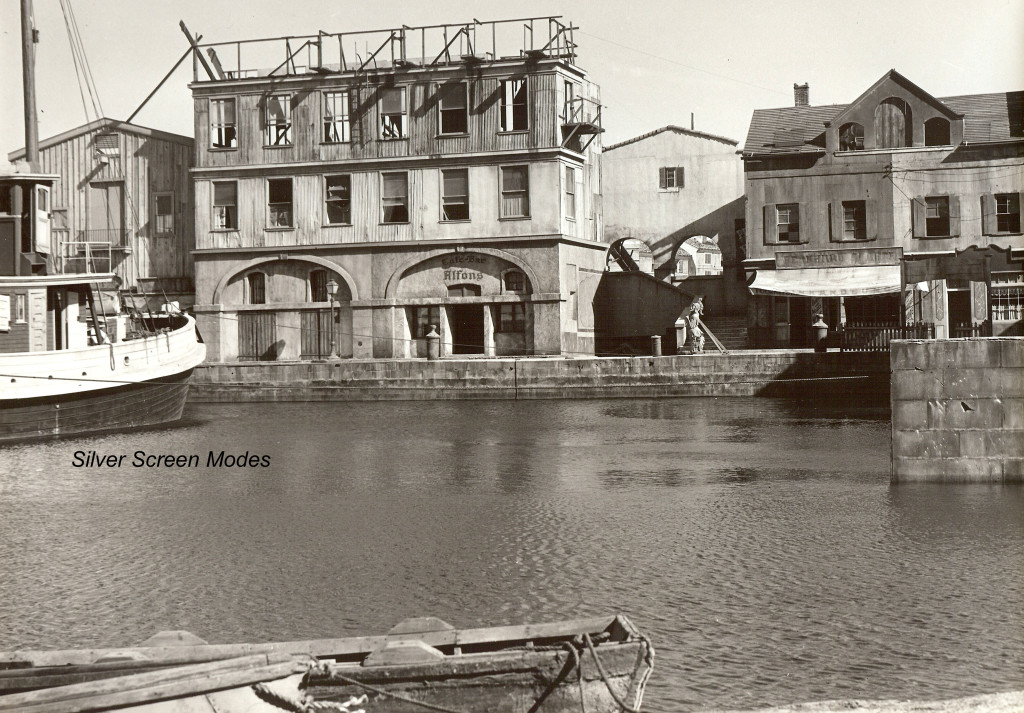 The European town waterfront above could be changed with its storefronts reconfigured and re-painted as-needed for each movie. It extended its length and was known as “Waterfront Street.” 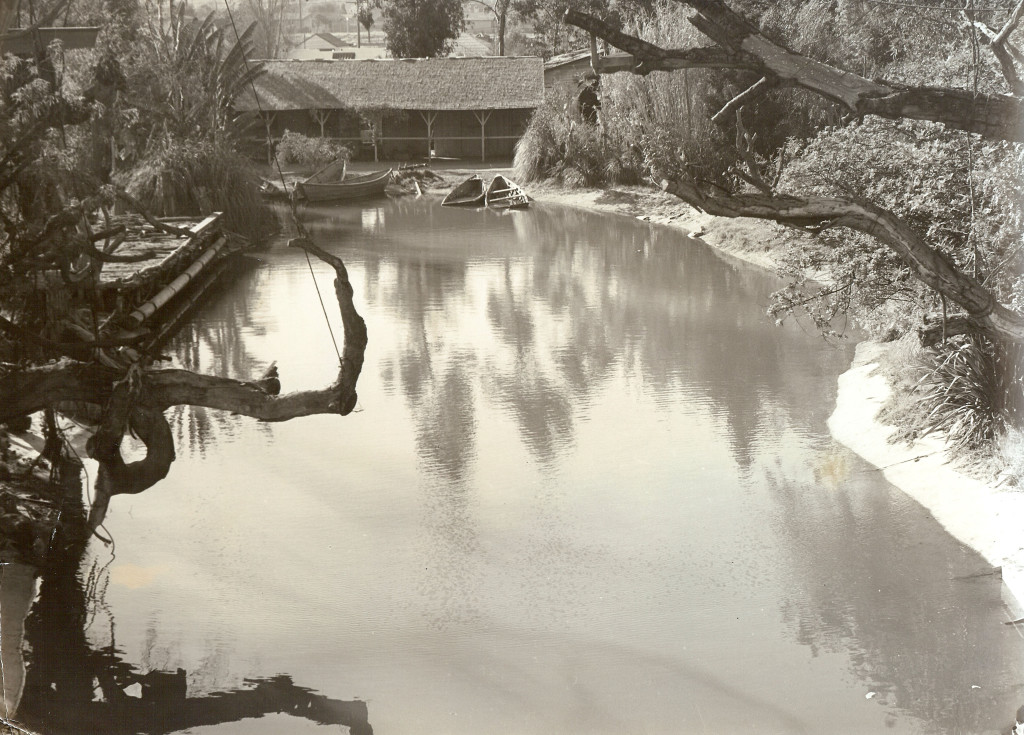 The more wild appearance of the lake or lagoon above was used for jungle-like settings, including for filming parts of Tarzan the Ape Man. Lot 1 also had standing sets replicating haciendas, medieval France, and New York City.

Moving over to Lot 2 across Overland Avenue, the lot was mostly used for standing sets, although various storage facilities were scattered throughout the lot.  The New England town of the Andy Hardy movies was there, and the “Small Town Square”  used in movies as diverse as Raintree County and The Philadelphia Story, not to mention The Twilight Zone, and there was also  the “Grand Central Station.” used in various films.  The “Waterloo Bridge” seen in That’s Entertainment, was also in lot 2, used in its prime for movies like The Divorcee in 1930, The Three Musketeers in 1948, Little Women in 1949, and  Royal Wedding in 1951.

Nearby is “Quality Street,” which was used for a variety of medieval and 18th century European towns. 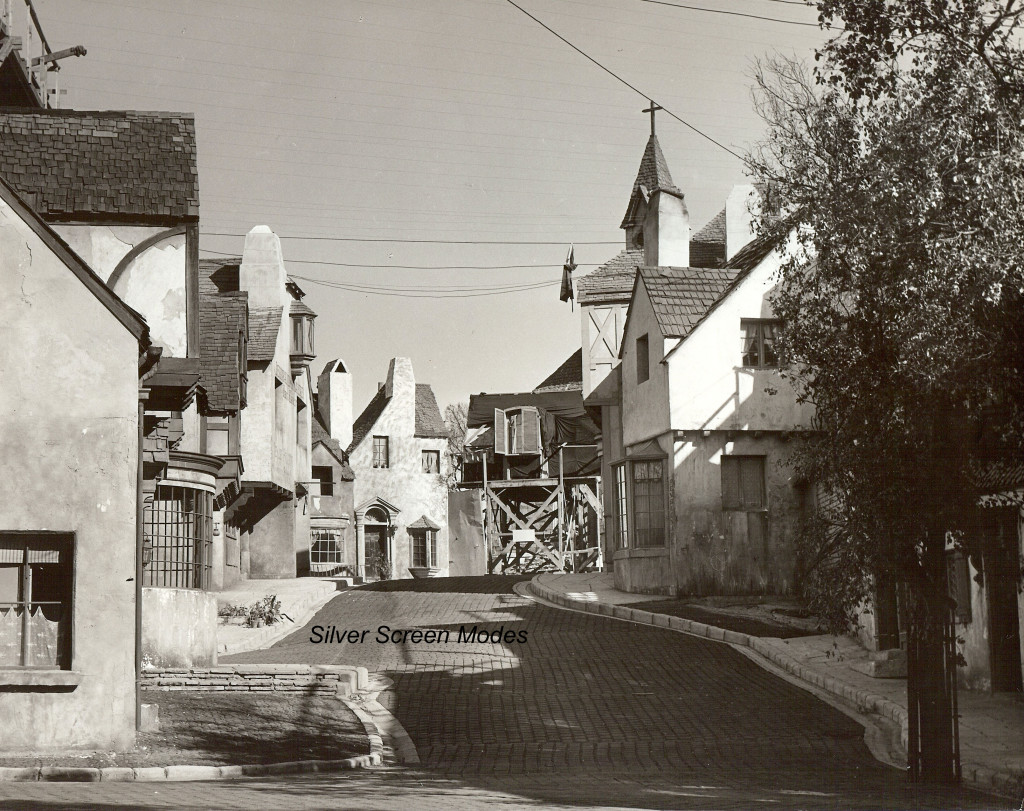 Quality Street was one of the old standing sets, originally built for Marion Davies’ starring vehicle Quality Street, from 1927, which William Randolph Hearst and his production company Cosmopolitan Pictures produced for her at M-G-M. It was also used for filming the 1948 production of The Three Musketeers.

Quality Street was also redecorated as an English Street for the Jeanette MacDonald film, Smiling Through from 1941, as seen above. 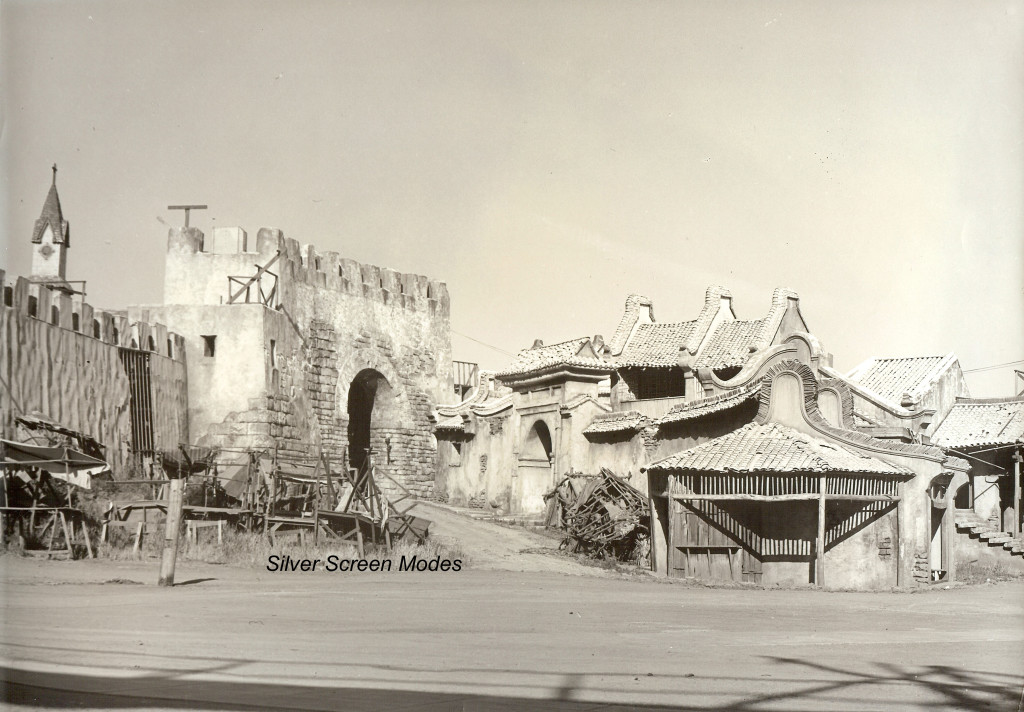 A continent away in architecture and theme but adjacent on the lot was a Chinese set used for The Good Earth in 1937. The castle wall and entry was used and re-used for a variety of films set in different countries and eras. It may have been originally built for the first Ben Hur in 1925. 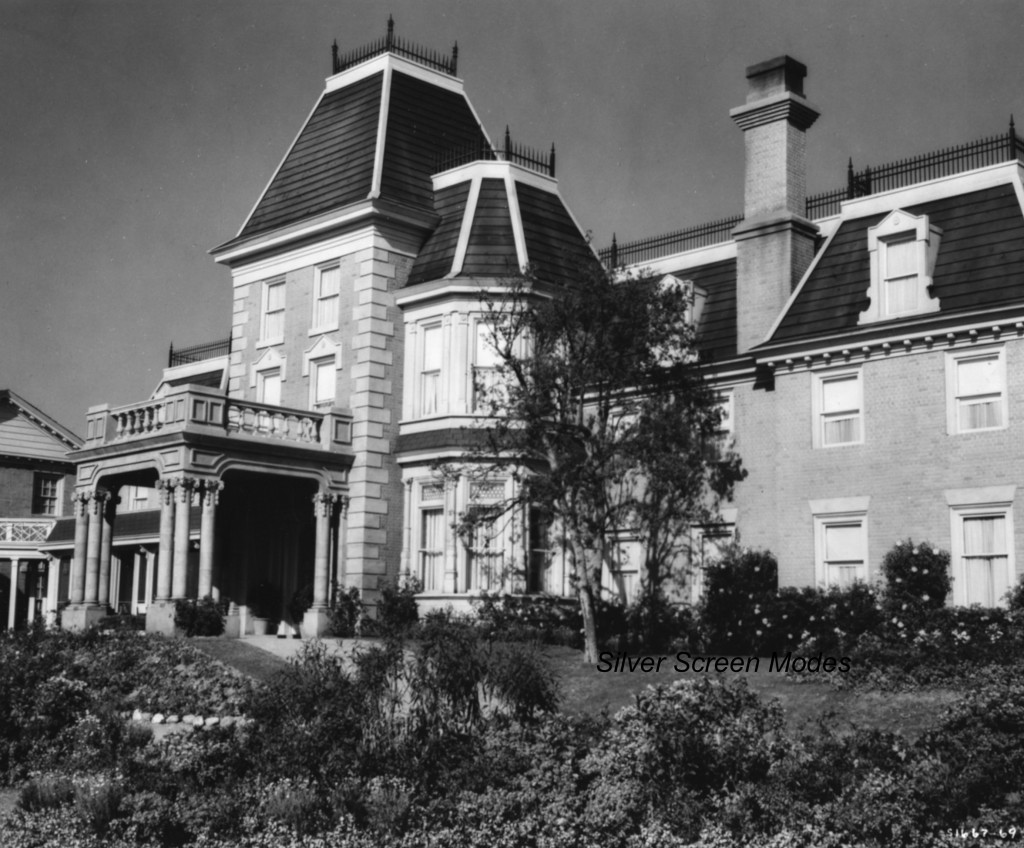 The mansion-looking set above was used for several movies but looked different for each. In two it was an academic building, having been built, apparently, as a “girl’s school” for Forty Little Mothers in 1940, where the structure had a bell tower. It featured notably in Tea and Sympathy with Deborah Kerr and John Kerr in 1956. The structure as it looks above was used for The Cobweb, where it was a psychiatric clinic. This 1955 movie starred Richard Widmark, Lauren Bacall, Charles Boyer, and John Kerr. 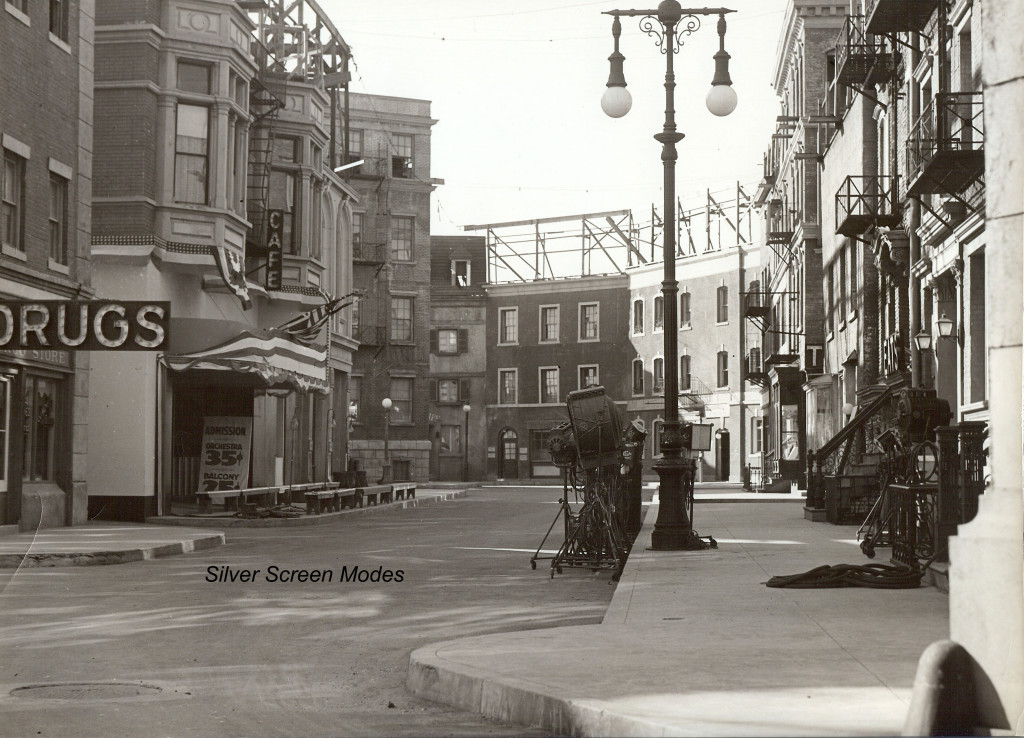 The New York Street on Lot 2 was a larger set than a similar set on Lot 1. It had nearly ten acres of sets and could serve for a variety of urban settings.  Many movies were filmed there, starting with Wife vs Secretary in 1936, others including Words and Music, Band Wagon, Singing in the Rain, and many more were also filmed on these sets. 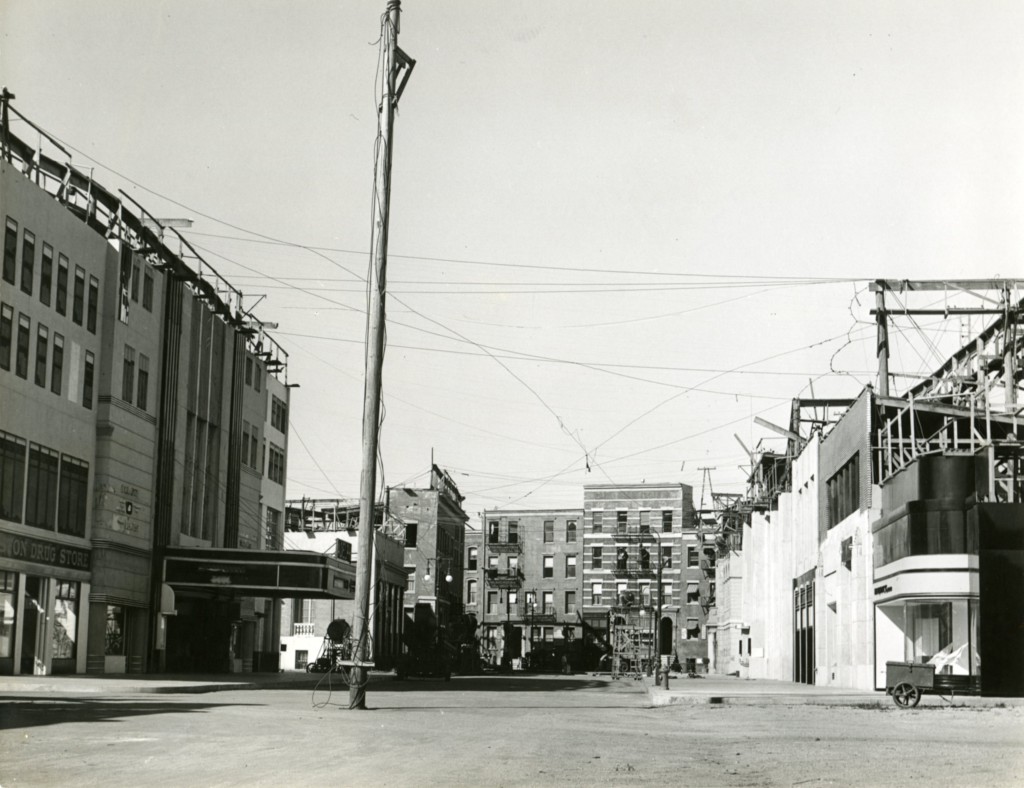 The photo above shows the suspended electrical power lines feeding into the various sets. The framing supports behind the façades can also be  seen.

We take the tram down Overland to Lot 3 at Overland and Jefferson. This more remote lot (or so it was in the 1930s and 40s), allowed for some expansive outdoor sets. 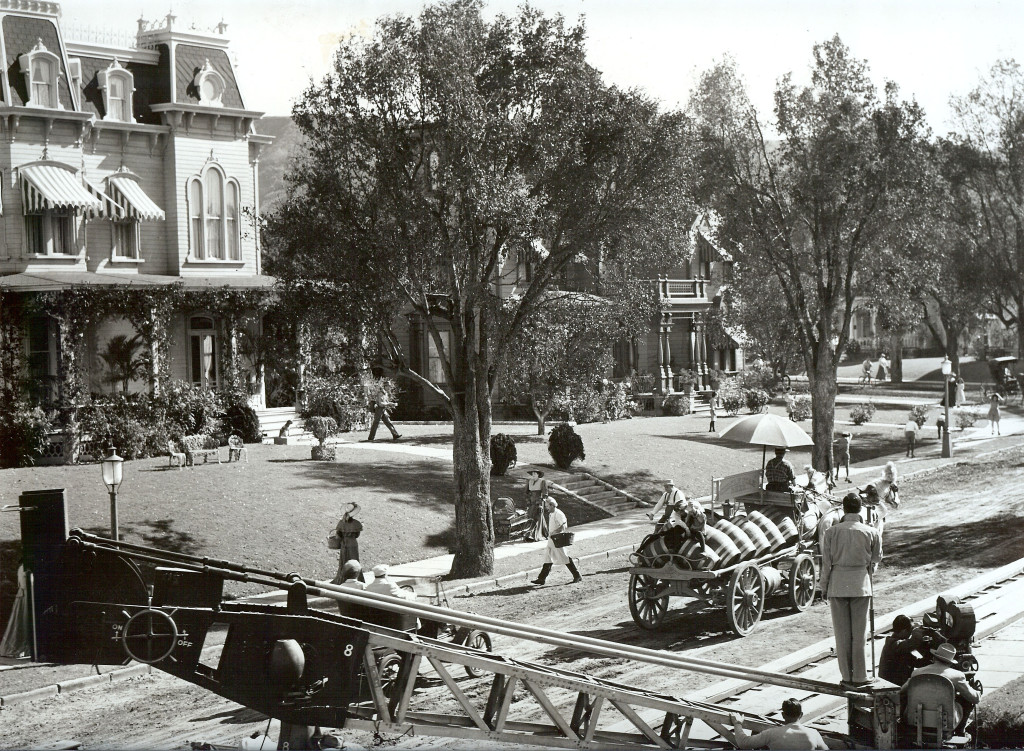 One of the most famous “neighborhoods” on Lot 2 was the “St Louis Street,” named for Meet Me in St. Louis starring Judy Garland and directed by Vincent Minnelli. It was built expressly for the latter film at Minnelli’s direction. Minnelli can be seen directing the scene on the boom above.

The outdoor set below is the New England street and set for the Andy Hardy movies starring Mickey Rooney. It became known as the “Andy Hardy Street.” 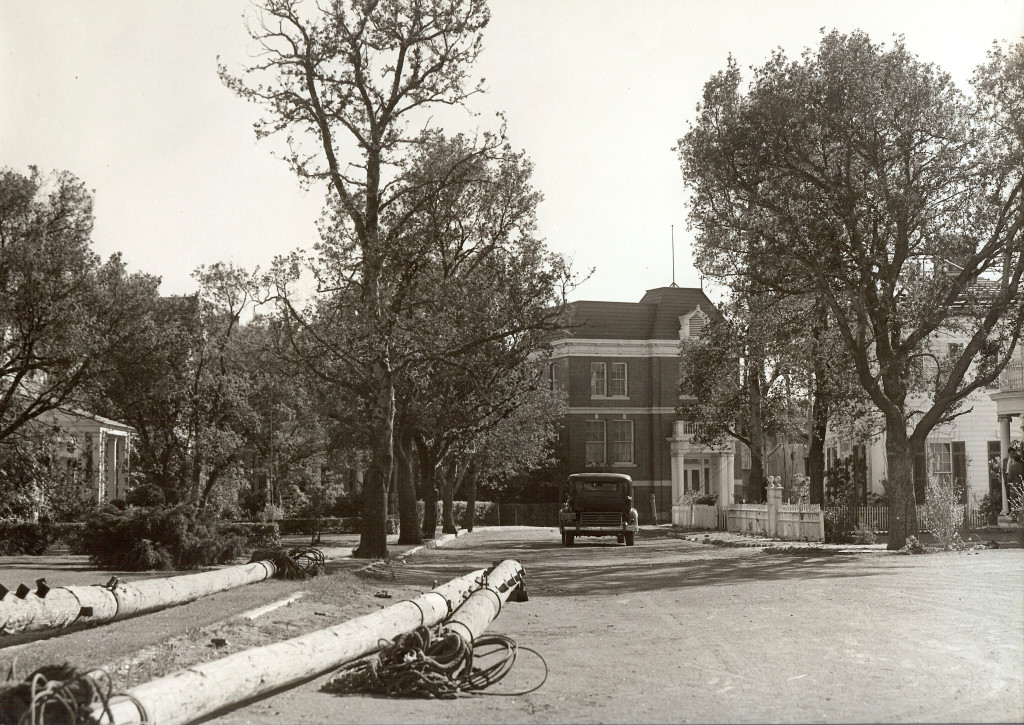 The first permanent Western Town set on Lot 2 was built for the 1939 film Stand Up and Fight, starring Robert Taylor, Wallace Beery, and Charles Bickford. The standing set is amazingly detailed, especially compared to the western sets of the films from the 1970s- on and the spaghetti westerns. 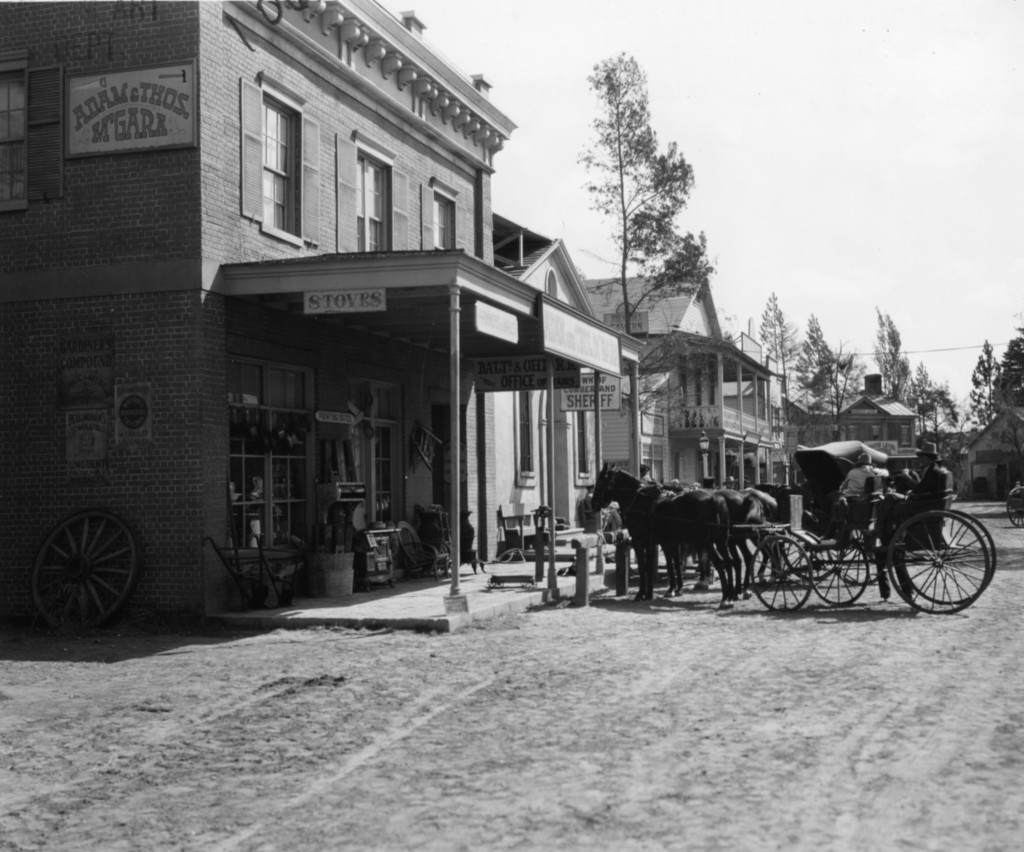 Above is the Adam & Thomas McGara Store set from Stand Up and Fight. 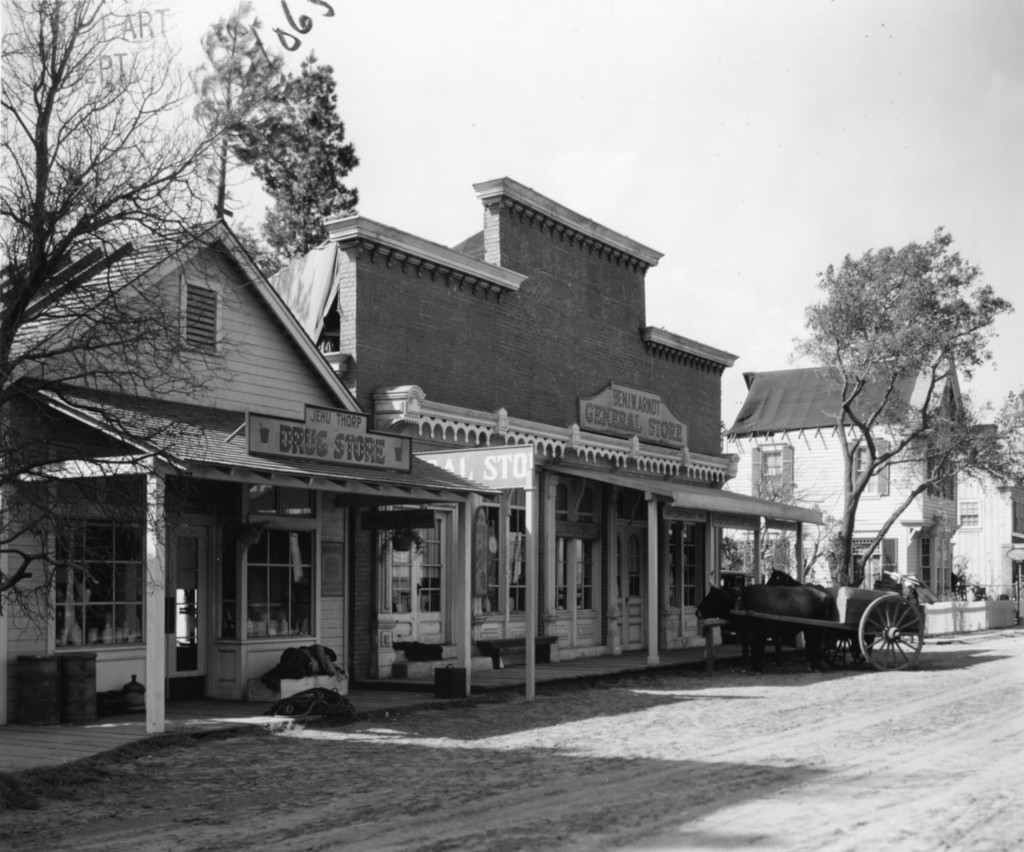 Above is the General Store in the center of the photo with the Drug Store to the left. 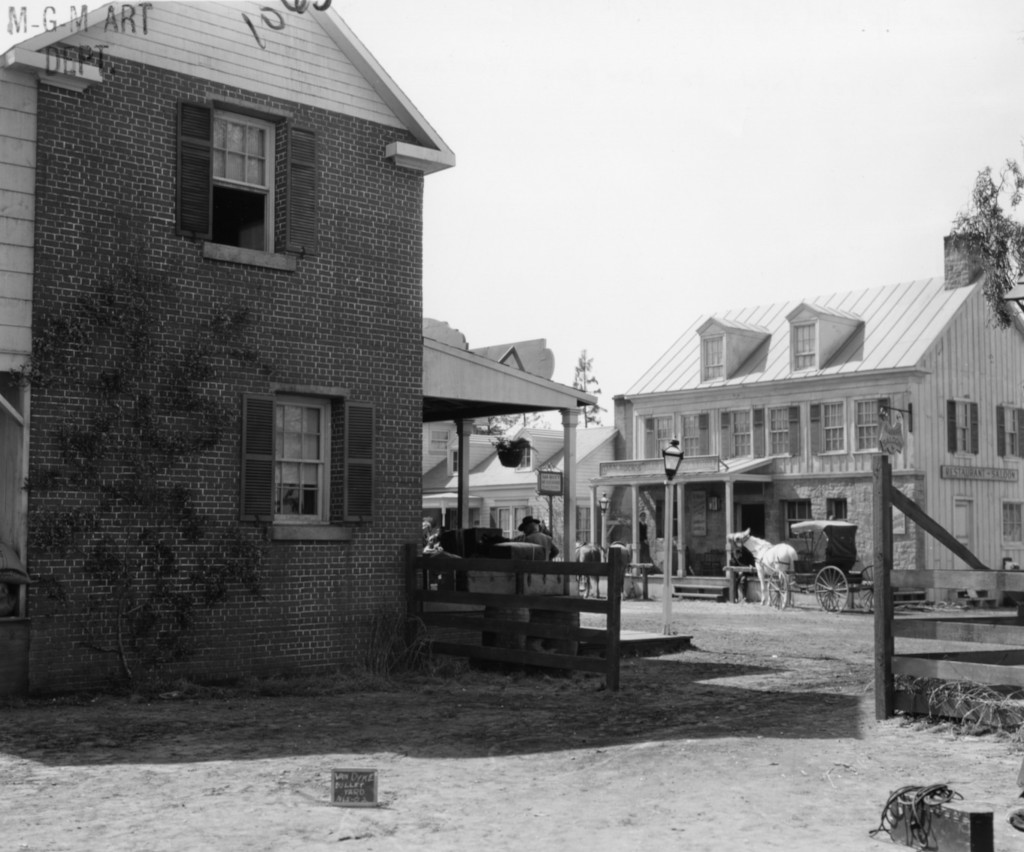 The “Bullet Stage Yard” is in the foreground above with a view to Dan Rock’s Restaurant and Saloon. 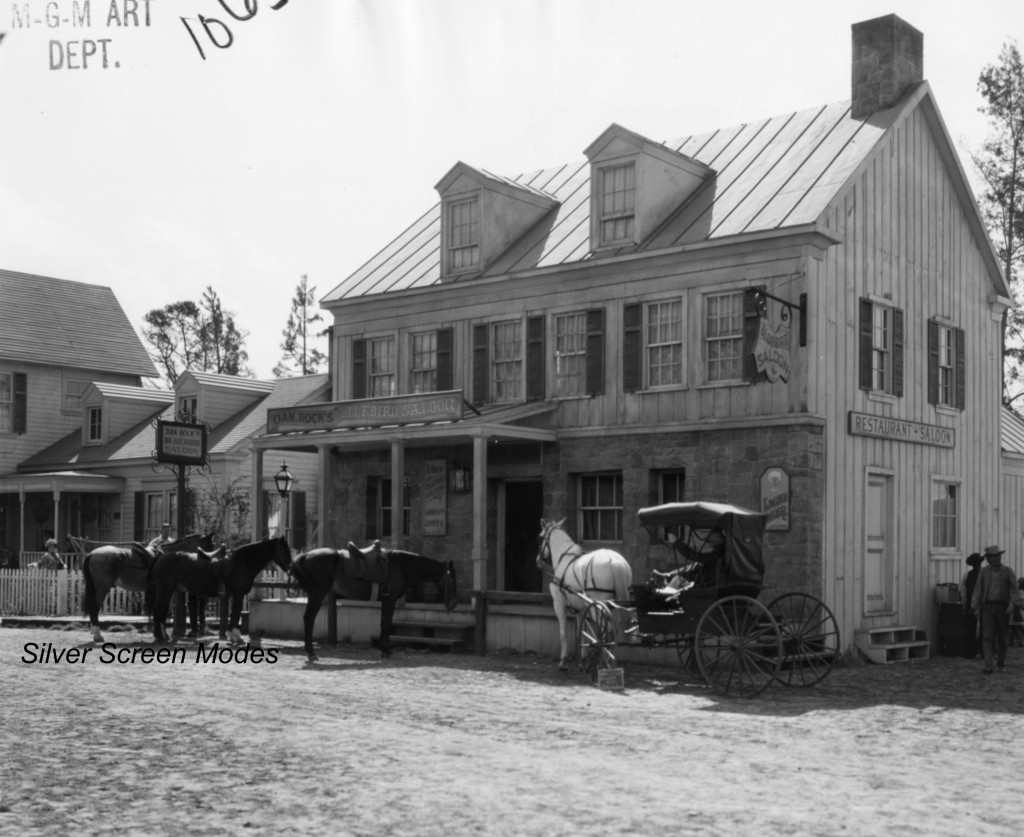 Dan Rock’s Restaurant & Saloon is seen above with its hitching posts for horses and teams. 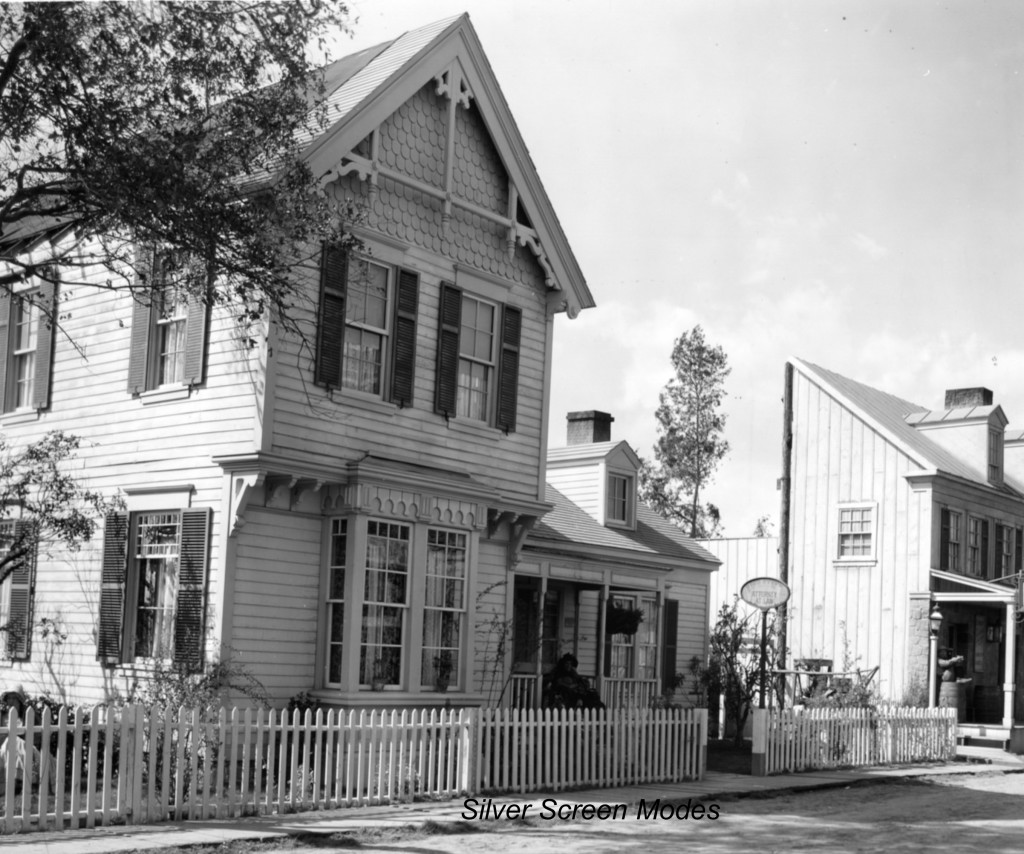 The house above was the attorney’s home on the set – note the partial front on the neighboring house, but the carefully built picket fence and shutters. 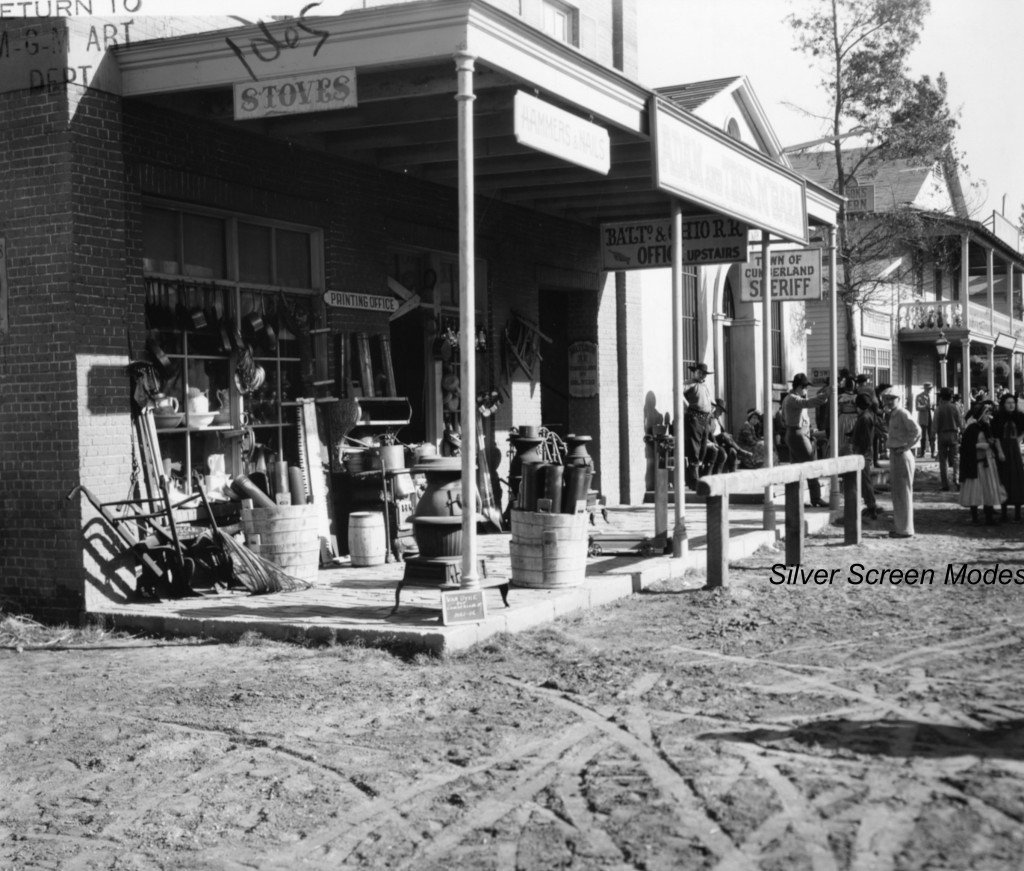 Note all the paraphernalia at the Hardware Store.

A proper town needed its Sheriff, and the town of Cumberland had theirs as seen above. 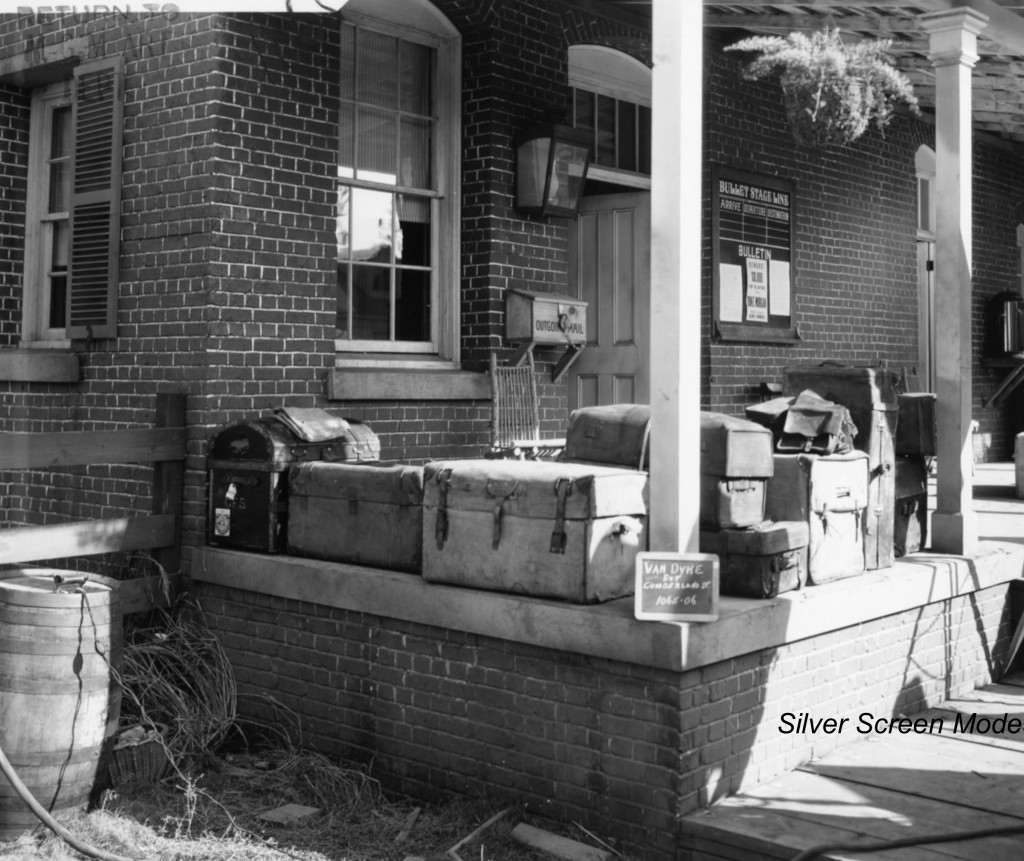 Luggage is part of the set dressing at the “Bullet Stage Line.” 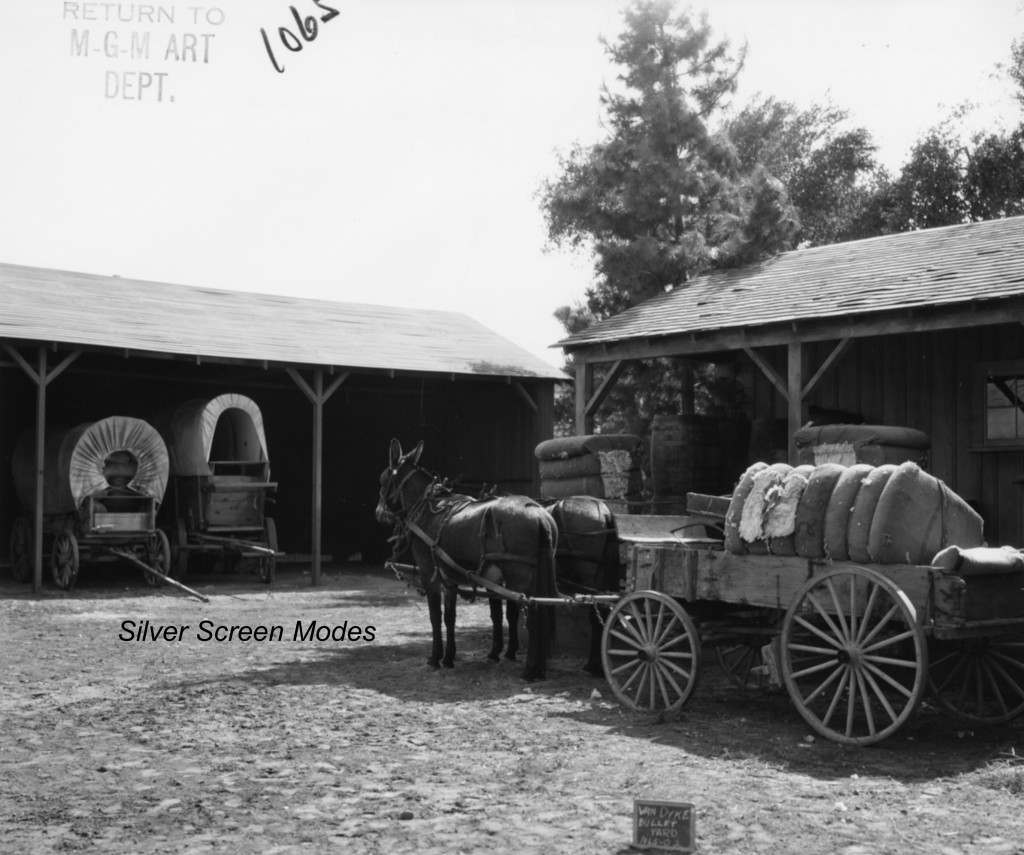 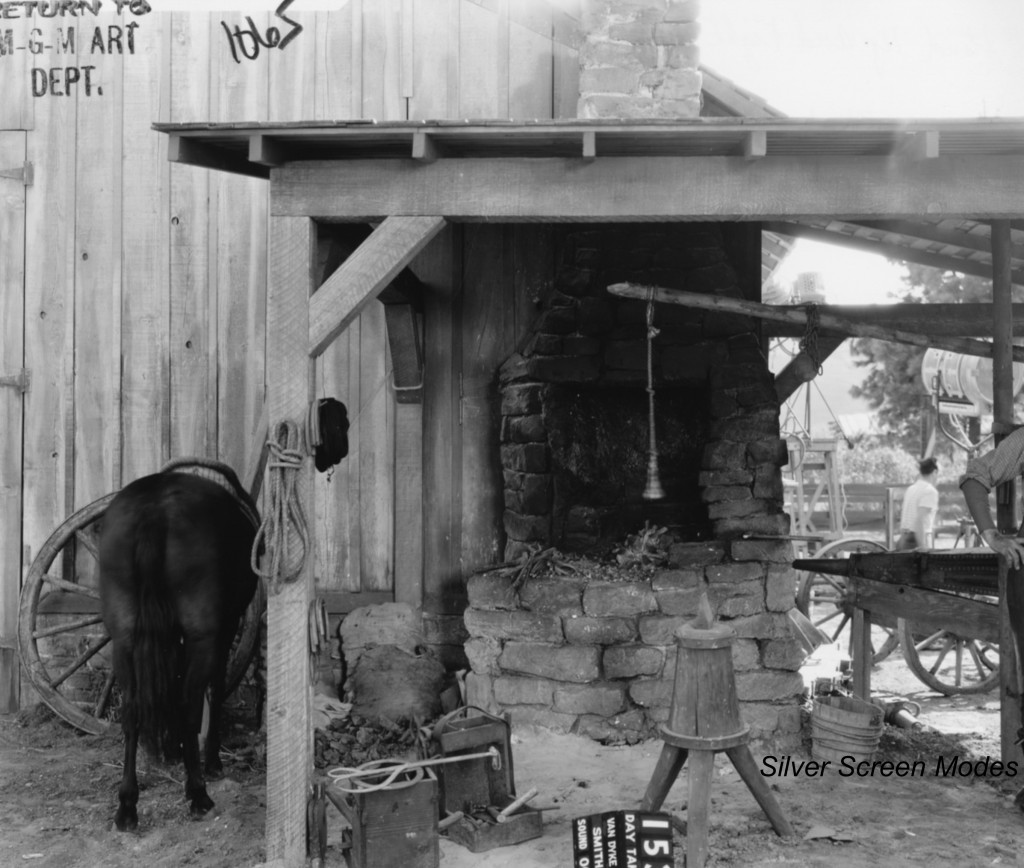 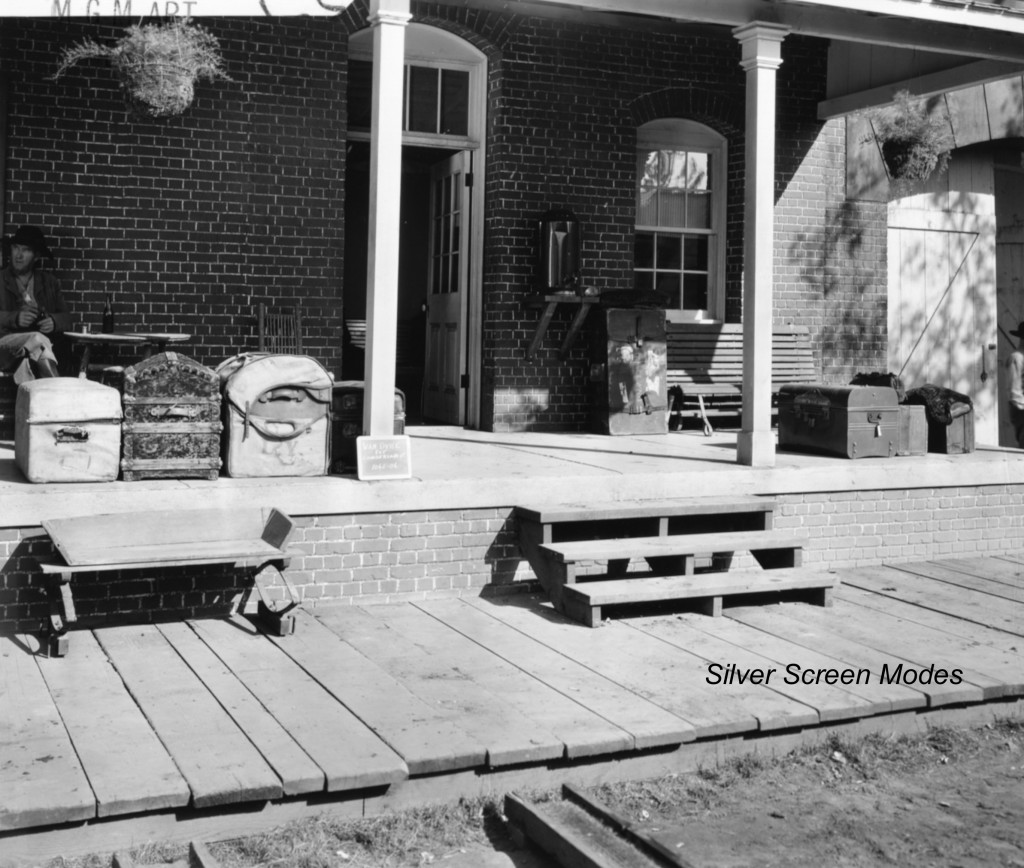 A porch on Cumberland Street opposite the Restaurant & Saloon

The Church is our last stop as we leave the wild west for other locales.

Lot 3 also had another lake and waterfront, seen below in this Port scene from some unknown film. 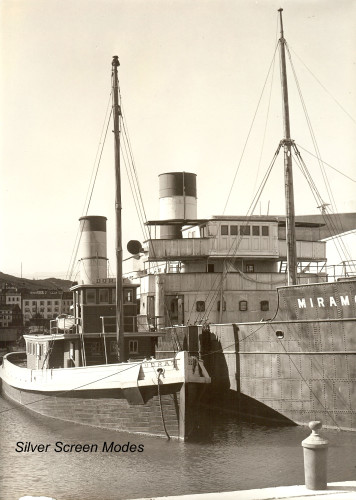 More familiar is the “Cotton Blossom” from the movie Show Boat, which M-G-M publicist Lionel Ascher visits below.

The photo below shows the concrete storage sheds for storing MGM nitrate film cans, circa 1936.  Later, M-G-M had an electrical fire in 1967, destroying most of the studio’s cartoons, silent films, and films from the earlier Metro, Goldwyn, and Louis B. Mayer Pictures. 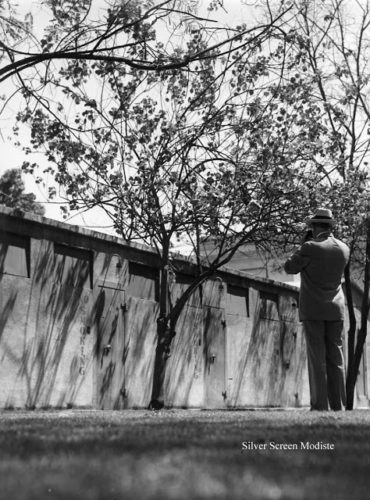 A fly-over Lot 1 shows the classic era M-G-M and the standing sets that existed, with the Thalberg Building at the bottom left. 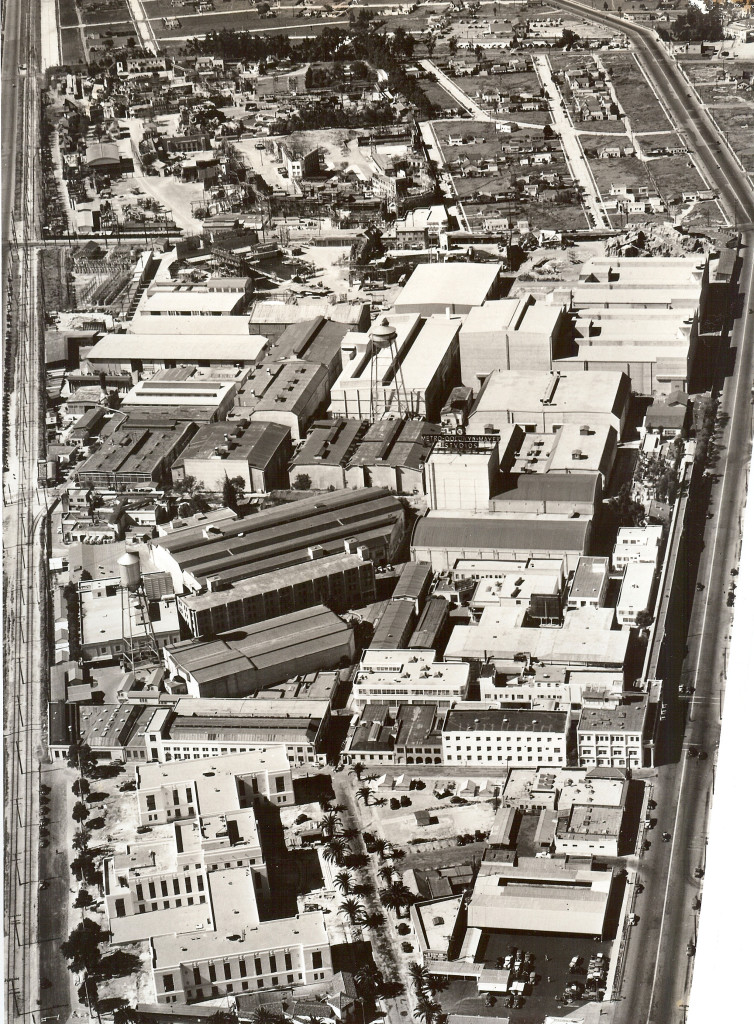 His three books on the Hollywood and Los Angeles area filming locations for Charlie Chaplin, Buster Keaton, and Harold Lloyd films are fabulous.

The corporate history of MGM post-1974 is its own story, but it separated the classic film library and the studio lot from the name. Similar fates had befallen RKO and Columbia. The three-week long auction of the props and costumes is its own fascinating, if sad story, a subject for another post. The destruction of the many standing sets and the sale of the lots was a tragedy to classic movie fans. 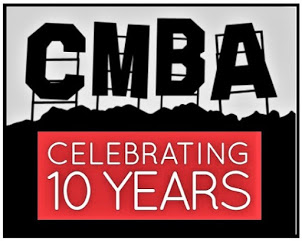 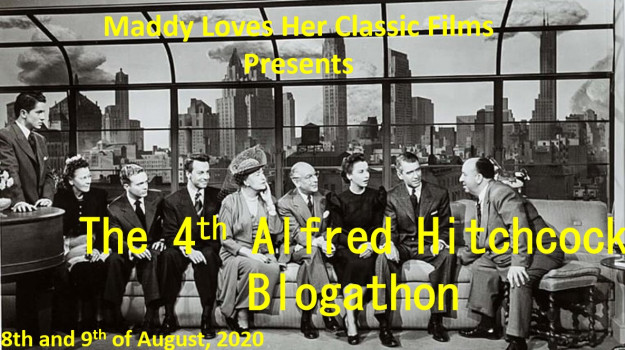