Women movie stars have traditionally gotten all the attention for their glamour, fashion styles and movie costumes. But the look of male stars has also been important. And while men’s styles have a fashion stability that often lasts for decades, this makes it even more important for that unique personal twist – that bit of extra style that distinguishes the screen man of fashion.  Looking back over several decades we can see some of those striking fashions and definite influences on the discerning male wardrobe.

For something different, we’ll start with a fairly recent movie and then go back to the classic era. Let’s start with Ryan Gossling in Drive, from 2011. Gosling  plays a Hollywood stuntman and mechanic – good skills for also being a getaway driver on the side. No suits or tuxedos are called for in his wardrobe. This is a neo-noir directed by Danish director Nicholas Winding Refn.  Costume design by Etrin Benach.

Ryan Gosling above wears a 1950s style Korean satin bomber jacket. On its back is embroidered a scorpion. The jacket was custom made. This style of jacket was popular in the 1950s during and after the Korean war, and had large emboidered images on the back. The style fitted the retro look of the movie and gave a distinctive look to Gosling.

The Levi’s jacket is another stylish piece that gives a retro but also timeless look (I wore one in high school in the late 60s). Here his is  very snug and is fitted short. As with all movie costumes, they are meant to emphasize the character the actor plays.

Tyrone Power was “the” matinee idol of the late 1930s. Women flocked to his films, and although he was a serious actor, his studio, Fox, put him in one swashbuckler movie after another. His good looks made him a natural for pairing with many of the leading ladies of his day. He looked good in either leisure clothes, suits or formal. The herringbone tweed jacket he wears above is a classic for any wardrobe. It can last decades as long as your size doesn’t change significantly, and it never goes out of style.

Powell’s swordplay and fencing was athletic and skilled, His fencing duel with Basil Rathbone in The Mark of Zorro is, as this former collegiate fencer can attest, the best seen on film.  With his dark hair Tyrone Power looked good in black, a natural for black and white films.

Earlier in the 1930s a couple of top stars made their mark through two very different routes. Although one was tall and good looking, the other could dance with great style and class. 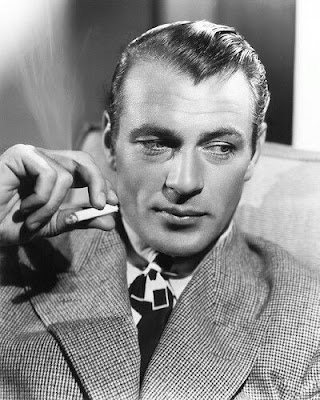 Gary Cooper has been one of the handful of male stars that exemplified fashion flair and striking good looks in his day. He was over six feet tall and had the angular features that made him a magnet for the camera and for female audiences. Having been born in Montana to English parents, he spent part of his youth attending school in England. He embodied that odd mixture of a horseback riding cowboy and dapper gentleman that would make him a versatile movie actor. His horse riding abilities landed him his first job in Hollywood as a cowboy film extra. His seemingly contradictory persona of toughness and playful bashfulness endeared him to women, and several of his leading female co-stars fell in love with him, notably Marlene Dietrich and Ingrid Bergman. His tall lanky body made him look like a male model in tuxedos or suits, both of which he seemed as comfortable wearing as he was of blue jeans or khakis. 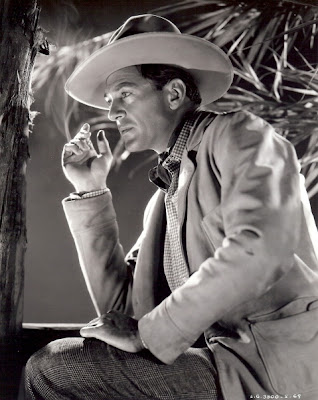 Fred Astaire personified the well-dressed American gentleman, seemingly born in white tie and tails. Yet he was born to immigrant parents in Omaha, and he and his sister grew up performing in Vaudeville. Fred’s sister Estelle went on to marry the second son of the Duke of Devonshire, and thus Fred’s exposure to the English upper-class provided him the polish that, like Gary Cooper,  put him in film roles that could show either his everyday American, or high-class gentleman, persona. 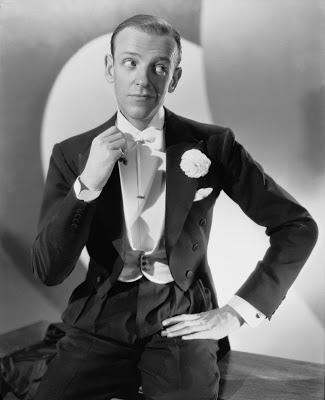 Fred never really liked wearing tuxedos (dinner jackets, as is the proper term) and top hats. His natural flair really came out when wearing sport-coats and comfortable trousers, all the more appropriate for his vigorous dance routines on film. He personalized his wardrobe by wearing neck-ties as belts, and his colorful socks lent him individuality while providing flashes of color while he danced. His shoes too looked both flashy and comfortable – brown suede or black and white “correspondents.”

Fred’s dancing was legendary, and he made all his dancing partners, almost all legends themselves, seem all the more beautiful and graceful. But then again Fred danced with broomsticks, chairs, hat racks, canes, shoes with wings, and even with his own shadow – and he made them all look good too. 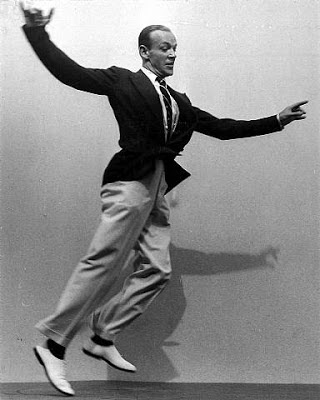 Cary Grant was the other most handsome and best dressed man of the 1930s and 40s. He looked great in a dinner jacket also, but he really owned the suit. As his hair turned from dark to gray over the years his suits went from black and dark colors to medium grays. He exemplified on screen the increasing use of the solid color business suit for American men during the 1950s. These suit jackets had two or three buttons and narrow lapels, almost always worn over white shirts with French cuffs and pocket squares. The pants were narrow, even when fitted with pleats and cuffs. Cary Grant, like Fred Astaire, and keeping to the style of that period, liked his pants with a high waist.

The famous suit Cary Grant wore in North by Northwest was a medium gray. Not particularly noticeable, especially on a small screen, is that his suit was in a Glen plaid wool, and the jacket was ventless. His sock color matched his pant color – a good tip in dressing – which gives the legs a longer and more seamless look. Alternatively, Fred Astaire used contrasting colors for his socks, but this was a way to enhance the look of his feet while dancing. Cary Grant’s look from the 1950s (also bolstered by Greg Peck in The Man in the Gray Flannel Suit), was revived on the Mad Men series. 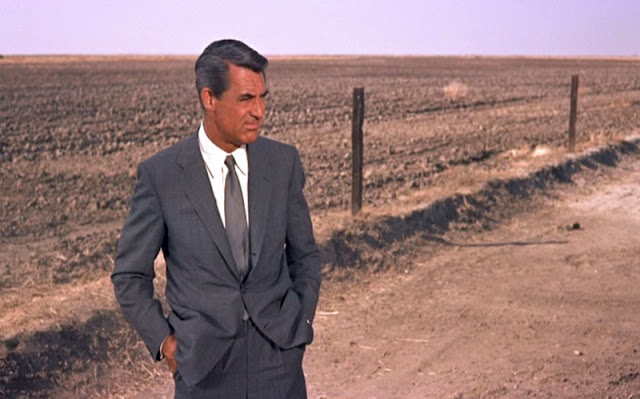 Men’s styles on screen made sharp turns during the 1960s, but the decade started out with the ever-classic dinner jacket and black-tie look personified by Sean Connery in the James Bond films. Whether in a jacket with lapels or one with a shawl collar, in black or white, Sean Connery had the broad shoulders, the tall figure, and the masculine grace to make the look his own.

Steve McQueen seemed to own the screen in the 1960s, or at a minimum, was considered the coolest actor of his day. His tough years as a youth matched with his considerable physical grace made him another actor that could play cowboy or banker with equal comfort and style. While his personal wardrobe was worn for comfort or the needs of his various motorcycle riding or car racing hobbies, he looked great in a pin-striped three-piece suit for The Thomas Crown Affair, 1968. He helped return the vested suit to popularity.

And Steve McQueen always looked natural and attractive in casual clothes. Below he is shown in his glider pilot outfit from Thomas Crown. He was often seen on screen wearing tanker jackets, which he wore in his early film The Blob, in 1958. The tanker was a World War II Army jacket that has served as a model for many of the casual jackets worn by men ever since. 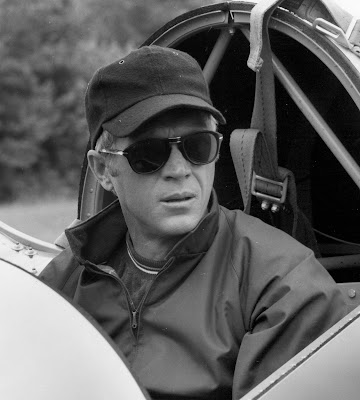 In 1971 a new film genre began with Shaft, starring Richard Roundtree, playing a black private detective as a tough but cool character in the mixed up world of black crime and white injustice.Richard Roundtree’s wardrobe helped define his role. His frequent use of turtlenecks provided a classy anti-establishment look made masculine by his long black leather coats and brown leather jackets.


In France the American gangster look of the 1930s was being recycled in films such as Borsalino, 1970, starring Alain Delon and Jean-Paul Belmondo. In Le Samourai, 1967, directed by Jean-Pierre Melville, Alain Delon plays a hitman. He is usually impeccably dressed, in long coats and fur-felt fedora hats bringing back the 1930s look to American men’s fashion. He is also seen in the usual trench-coat, his with a stiffly starched collar that accentuates his handsome.face.

Alain Delon also starred in Purple Rain (Plein Soleil), 1960, playing the role of Tom Ripley in the earlier French version of The Talented Mr. Ripley. Delon is a natural for wearing the casual clothing worn on the French Riviera. Below he is seen in a coral-colored shirt.

Urban cool was personified in the disco fashions made famous by John Travolta in Saturday Night Fever. The look was characterized by tight flared pants worn over low boots, snug jackets, and colorful polyester shirts with big collars. The shirts were worn open in the continental European style, and the large collars would only work if worn outside the jacket collar. The look has often  been mocked (mainly due to its over-use during the 70s), but it was a unique fashion style for men that showed a lot of flair and panache.

As a plot element, the pinnacle of men’s fashion in film was reached with American Gigolo, starring Richard Gere and model Lauren Hutton and released in 1980. This film was important in transitioning American men into high quality Italian garments. Armani served as costume designer for Richard Gere, who made a big splash in the film with his casual-chic assortment of fine sport jackets, ties, shirts and slacks.


The crowning scene in the film came when when Richard Gere was selecting his wardrobe for his evening out – laying out his many clothing options and jacket-tie combinations on his bed, all the while strutting to a song by Smokey Robinson. The light-colored combinations of olive, grays, sandy browns and taupes influenced men’s fashion for more than a decade.

Another look altogether came from the streets and ended up in movies like Straight Outta Compton. Influenced by gangs and then rappers the look is mostly dark and baggy, with jeans or dark chinos and dark short sleeved shirts or t-shirts and bomber jackets or hoodies.With financial success bling was added with gold chains. The dark, loose clothing was convenient as camouflage on the streets, hiding person and their size when this was desired (or their weapons). The movie is about Compton rappers Ice Cube Dr.Dre, Eazy-E with DJ Yella and MC Ren.

There will be one more James Bond movie with Daniel Craig, and he will most likely look as good as ever.

Craig has worked with two costume designers, first with Lindy Hemming and with Jany Temime on the last two movies. His suits  have mostly been Tom Ford, along with Brioni. Lindy Hemming put him in dark blue suits, the blue to match his blue eyes. Jany Temime has liked lighter colors, especially gray to match his light complexion and light hair. While also using Tom Ford suits, she has preferred slight patterns such as sharkskin, glen-check, and herringbone.

With the current state of affairs, we may be arriving at the age of the peacock in film.

6 thoughts on “MEN’S FASHION IN FILM”