At the biggest and busiest movie studio of Hollywood’s Golden Age, hummed the most productive studio wardrobe department in movie history. At its most complete in the  1960s, it had some 300,000 costumes in its wardrobe storage – not counting those it had already dicarded in previous decades. MGM regularly produced over 40 moves every year, with its costume designers and wardrobe department producing the costumes for most of them. By comparison, today’s studios make 10-15 movies a year, and of course studios no longer have in-house costume design and fabrication capabilities.

The facade of the old MGM Studio and its original entry gate on Washington Blvd as it looked in 1936 is seen above. The Wardrobe Department was located near Washington Blvd and what the studio called 1st Street. Men’s Wardrobe was located elsewhere and costumes were also stored in various locations.  The Wardrobe Department had a manager who ran its day-to-day operations, separate from the costume design staff.  A view to the three-story department is seen in the photo below. In addition to the glamorous part of movie costumes, post-production they would have to be laundered or dry-cleaned, and then inventoried and hung up in the high racks. Bolts of fabrics of all kinds would have to be kept on hand or custom ordered.

MGM went through several designers after its beginning in 1924-25. The studio hoped to capitalize on the name of Erte in 1925, but he didn’t last. Andre-Ani, Max Ree, and Rene Hubert all did fine work but none lasted long at the studio. Gilbert Clark managed to last longer, but was as temperamental as the divas he dressed. This didn’t work for Garbo. So when Cecil B. DeMille came to make movies for MGM and brought his costume designer Adrian, he soon found his designer under contract to MGM. Starting in 1928, every movie that Garbo starred in was designed by Adrian, as was every Joan Crawford movie until 1941 when Adrian left to start his own fashion line. He also designed the costumes for Jean Harlow, Hedy Lamarr, Lana Turner, and Katharine Hepburn.

Seen below is a group of MGM wardrobe ladies at work.  The Adrian sketch shown and the costume on the dress form are for Greta Garbo in Grand Hotel. As was the case for all leading ladies, Garbo had her own custom-sized dress form (padded to her dimensions).

Hannah Lindfors, a cutter-fitter, is shown below. She  translates the designer’s costume sketch into muslin pattern pieces, which are then used to cut the chosen fabric. In this case its for a Dolly Tree design for Rita Johnson. When Adrian left to start his own fashion business, Hannah Lindfors left with him as his cutter-fitter. 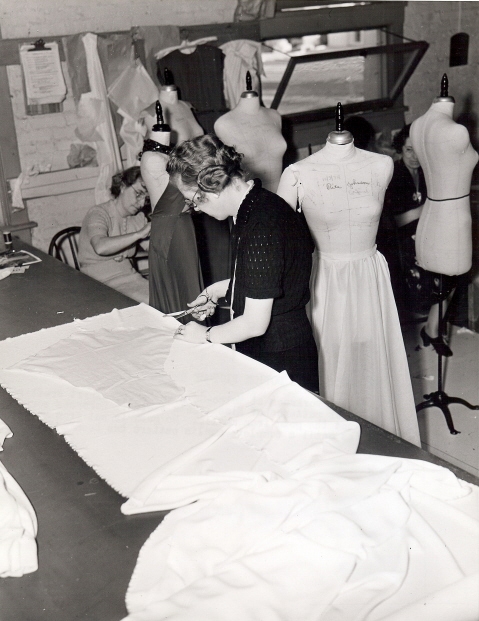 Several lace-makers are at work below on the bridal veil for Helen Hayes for the movie White Sister, 1933. It took two weeks to make.

Two Wardrobe ladies are working on the embroidery for a costume for Romeo and Juliet, starring Norma Shearer, Leslie Howard and John Barrymore. Adrian and Oliver Messel designed, and Wardrobe fabricated , some 1250 costumes for the film.

Cutter-fitter Inez Schrodt is seen below working on a gown for Marie Antoinette, 1938. The film starred Norma Shearer and Tyrone Power. Some 2500 costumes were used in the film, and Adrian designed 36 costumes for Norma, which was a long-standing record until Cleopatra of 1963.

Jane Halsey is seen below resting on a “leaning-board” during the filming of The Great Ziegfeld, 1936. The costume was made of bugle-beads and weighed 102 pounds. The leaning boards were heavily padded with cloth – less for comfort but as to prevent snags to the costumes.

Wardrobe ladies below are at work on Lana Turner’s costume in Ziegfeld Girl, 1941. The film had completely different but equally magnificent costumes as The Great Ziegfeld, which Adrian also designed.

Greer Garson has a stitch repair done to her costume by Vicky Nichols on the set of Mrs. Parkington, 1944. Her costumes were designed by Irene, who had taken over as head designer from Adrian. Irene was at MGM from 1942 until 1948. She was joined by Helen Rose and then Walter Plunkett. Irene Sharaff and Robert Kalloch also worked there for a period, and Gile Steele and  J. Arlington Valles designed men’s costumes.

The Wardrobe Department kept most all of the costumes it made. These were re-used in other films, and often modified. Costumes are being pulled here and placed on a rack for some film. All of these costumes were sold in the MGM auction of 1970.

This section of shelving shows Roman style helmets, most likely with other armor pieces further inside the shelves. Similar but smaller shelves housed thousands of shoes.

Shelves and bins of shoes of all sizes and styles were also available for stock use. After years some of these were neglected and placed in more recessed areas, where no doubt the, several pairs of the Ruby Slippers from the Wizard of Oz were later found. Only one pair made its way to the MGM auction of 1970. It set the record for the highest priced item at the auction: $15,000. At recent auctions, pairs of the Ruby Slippers have fetched around $2 million.

Lana Turner is shown below with a costume sketch for one of her costumes and the actual costume from The Prodigal, 1955. Herschel McCoy designed the costumes for the film.

By 1955 when The Prodigal was produced by MGM, the heyday of the studio system was over. Leo B. Mayer had been replaced as head of the studio by Dore Schary. The Consent Decree forced by the US Court over an Anti-Trust suit had made studios divest their ownership of movie theaters, and television viewing had decimated movie audiences. Costume designers like Walter Plunkett, who had been working since the late 1920s, had gone from designing for over 20 movies a year back then to designing just two movies  for MGM in 1957.

Fortunately, the legacy of MGM, its movies and the work of its costume designers and makers , and the other artists and artisans of the studio are preserved in the movies for all of us to see and enjoy. These behind the scenes photos show that the work of producing glamour was not glamorous. And in those days film credits did not acknowledge the work of any of them in wardrobe except for the costume designer. This is a small tribute to their work.

24 thoughts on “BEHIND THE SCENES AT THE OLD MGM WARDROBE”